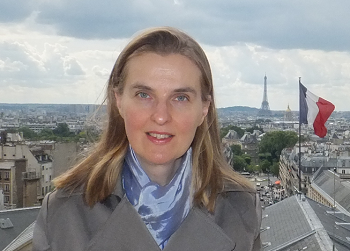 She has a 20 years’ experience in politics, consular and administrative management in the French diplomatic service.

Prior to her appointment in Moncton, she was Deputy Head of the Human Resources Services Centre in Nantes, a department of 80 employees responsible for administrative management and staff remuneration.

She previously held various political positions, including First Secretary of the Political Chancery of the French Embassy in the Democratic Republic of Congo (Kinshasa) from 2009 to 2013, where she followed the issues related to a post-conflict country, including peacebuilding and the restoration of the rule of law, in collaboration with international organizations. In 2005, she participated in the 60th United Nations General Assembly in New York as a member of a diplomatic reinforcement team at the Permanent Representation of France to the United Nations.

In the consular field, from 2006 to 2009, she served as Deputy Consul General in Canton (Guangzhou) China, where she supervised all consular activity and seconded the Consul General in his economic and cultural representative duties. She had already been involved in consular issues in Paris from 2002 to 2006 at the Directorate of French Nationals living Overseas. At the beginning of her career, she was vice-consule in Papua New Guinea.

Mrs. Laurence MONMAYRANT has a degree in applied foreign languages in English and German with a major in law and economics, as well as an experience in aeronautical technical translation. She also taught foreign languages in the United Kingdom (Norwich) and in Gabon (Port Gentil).

She speaks French, English and German and learned Mandarin during her assignment in China. Appointed a Knight of the French National Order of Merit in 2018.